You are here: Home / Music VIDEOS / Music Video for David Marcus’ I Heard the Bells

The music video for David Marcus’s stunning  I Heard the Bells (In Memoriam, Matthew Beyersmith)  showcases his original composition. 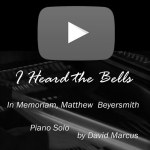 It features his precise and moving piano playing.  He is a multi-instrumentalist and professor, and we are also currently working on a website build for his portfolio and teaching.

This music video was recorded in only three takes at the surreal 800 East  music studio, here in downtown Atlanta.  Martin Kearns was the audio engineer and he set up a series of mics around David to record both his playing and the ambient room.  We brought in two cameras and studio lights, and then sat back and watched this masterful playing and musicianship.  We worked silently to capture facial expressions and quick moving fingers.  After the audio recording was complete, we did a few rounds of music notation details.  David had imagined the sheet music to play across the screen as certain parts of the song moved, and I loved working with his ideas to come up with this ephemeral, dizzying music video that ebbs and flows between layers of this soundscape.

Composer’s statement:
“This music reflects my gradual grief and catharsis following a surreal accident in June 1993, which took the life of Matthew Beyersmith, our friends’ sunny 10-year-old son. Afterwards, I had a recurring dream of bells tolling in Matthew’s memory, and eventually shaped this dreamt music into a composition that opens with meditative tolling, and then gradually unlocks grief, anger, inwardness, catharsis, and acceptance.”

Here are the video credits:
Audio engineer: Martin Kearns. Video editor: Jessica Lily
“I Heard the Bells” was premiered in Tallahasee, Florida, in 1996, and has been performed at Emory University, Clark Atlanta, University, and Morris Brown College.